There are few delicacies I enjoy so much as Dim Sum - literally, "the heart's little treasures." Here in Cleveland, we are fortunate to have multiple options for Dim Sum, but the options are not numerous. Thus, the opening of a new purveyor of dumplingy treats (and authentic Chinese food) always attracts my immediate interest. It is no surprise then, that within about 24 hours of learning about Cleveland's newest entry in this department, I'd found a few friends willing to trundle down to Cleveland's old Chinatown - Rockwell Avenue between 21st and 24th Streets - to sample the wares at Emperor's Palace, 2136 Rockwell Ave., Cleveland OH 44114. 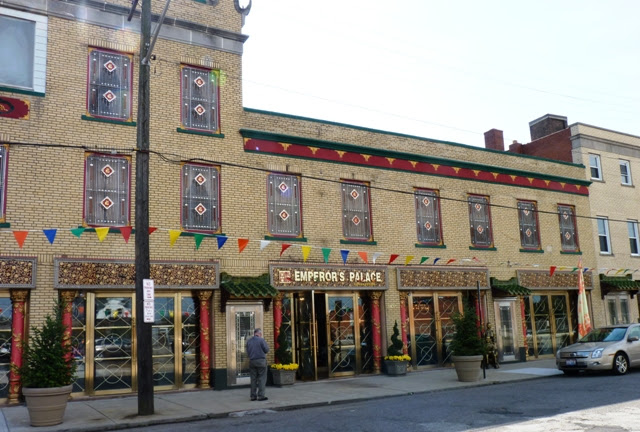 The formerly run down building has been magnificently restored to full splendor. 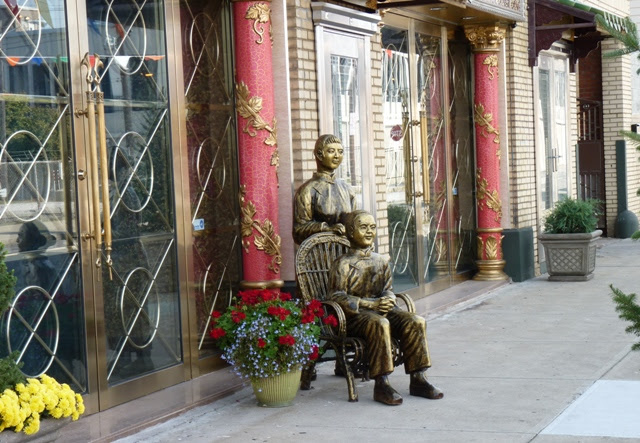 An ample, free parking lot sits just across Rockwell Avenue, girded by impressive looking statutes representing all of the symbols of the Chinese Zodiac.

Inside the restaurant, we found two large dining rooms, plus a private banquet room that seats about 14.  The decor reminded me of Dim Sum parlors in New York or San Francisco  Speaking with our hostess, I learned that two additional restaurants are planned for the site - a vegetarian eatery and a place featuring Szechuan cuisine.

Our initial experience was a little strange. Three of us had arrived and were seated in the second dining room. We were the only non-Asian customers in the place. While we awaited our final two companions, the server asked if we wanted tea before we'd looked at the menu, and we said yes. Though the menu lists several varieties of brewed tea (which we didn't realize until too late), our server brought out a pot with Jasmine tea bags hanging out of it (and Jasmine tea isn't one of the varieties listed on the menu), then dropped silverware at all the places and snatched up the chopsticks from the places for our two absent friends. But after we waved away any discussion of the "lunch specials" part of the menu and started digging into the Dim Sum, our hosts understood what we were there for, and were most gracious. Once the tea-from-bags pot was emptied, I asked for Oolong tea, which was promptly delivered for the rest of the meal.

Though they have carts, such as the one shown below, the carts did not circulate through the restaurant as in a traditional Dim Sum. Instead, the "dumpling cart" and the cart below were parked in the main dining room. Servers took our orders from the menu and brought each plate of Dim Sum, piping hot, mostly from the kitchen. I was told that the kitchen also contains live fish and seafood tanks. They were out of some menu items, including the "Juicy Buns" or Xiao Long Bao (Soup Dumplings), which is hopefully a good sign that everything is made in house. 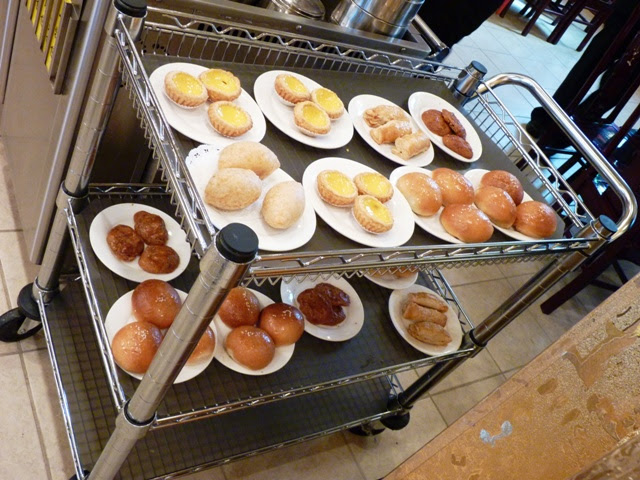 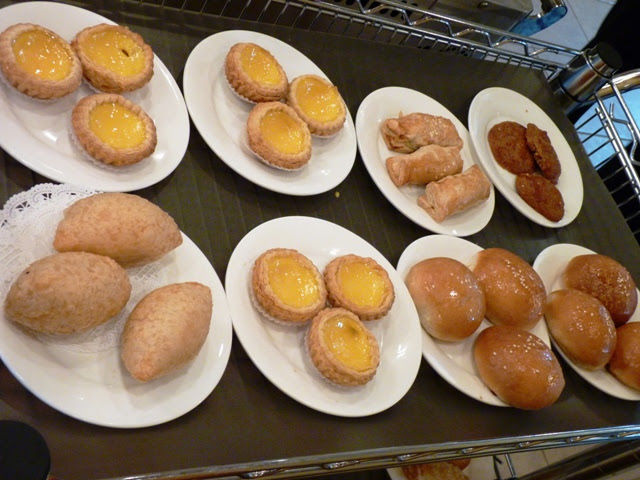 This toothsome dumpling was a perfect starter, conjuring up very traditional Chinese gold coin imagery. It was unique - a little sweet and creamy, but with enough starchy body to hold up to those chopsticks, and a delicious winter squash flavor. I'd love to know what the characters stand for, if anyone cares to chime in at the comments! 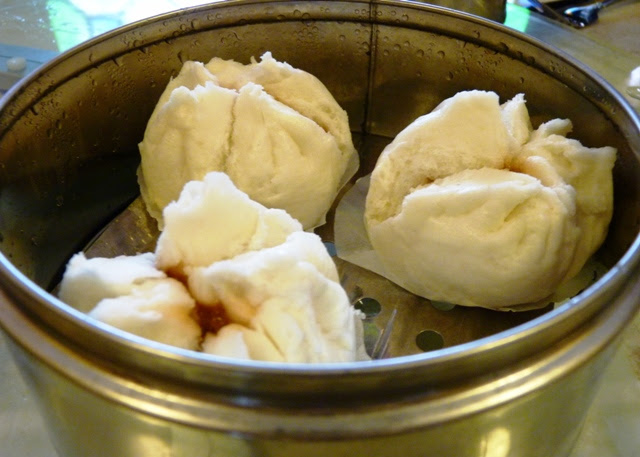 We all enjoyed the BBQ pork and light pastry of this familiar specimen. 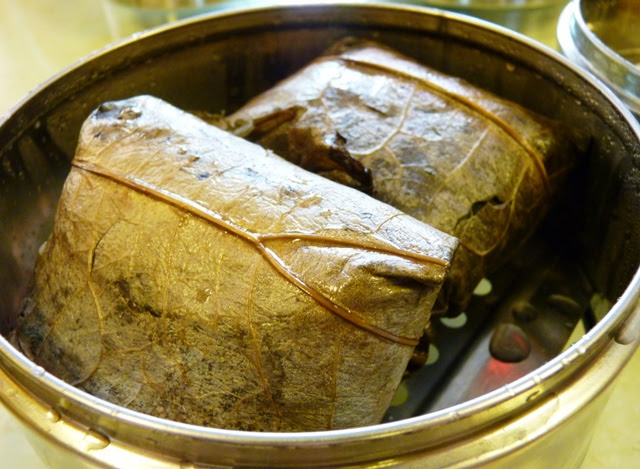 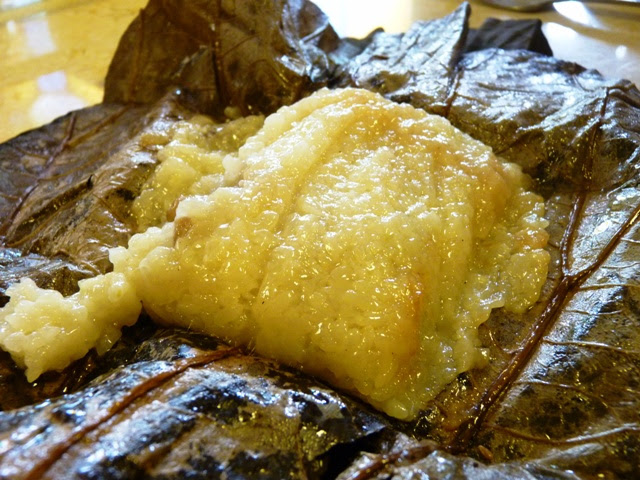 We selected this more familiar incarnation instead of the intriguingly named "Sticky Rice and Preserved Meat Buns" for our sticky rice fix, and were rewarded with creamy rice that had soaked in lovely flavors from the chicken-based stuffing (there was one slice of Chinese Sausage, or Lap Cheong in the stuffing, which was  so good it made me wish there was more of it!). I'll have to get the buns on my next visit to Emperor's Palace.


Sui Mai are perhaps the most ubiquitous of Dim Sum items. These tasted fresh and succulent, however, as I would expect, the shrimp was standard food service variety and less to my liking than the savory pork.


I loved the taste and texture of the short ribs, which melted in the mouth, but missed assertive black pepper flavor from this dish. I would still order it again because of how well the meat was prepared.


These fried footballs are filling, so be warned - sharing is a good idea here. Ours were served right out of the fryer, so they were intensely hot, savory and delicious. A glutinous rice flour-based skin puffs up around a savory pork filling - it is one of my favorites, but is often cold by the time it comes around on the cart, so Emperor's Palace gets major style points here. 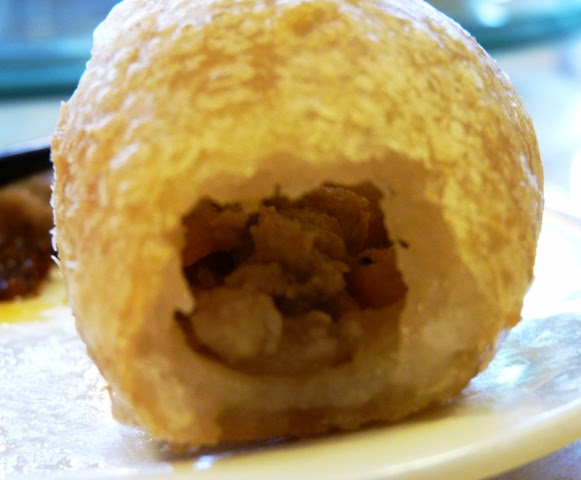 Several of my tablemates pronounced this a favorite. I liked the donut-like dumpling, but not quite as much as the others did. Different strokes for different folks. 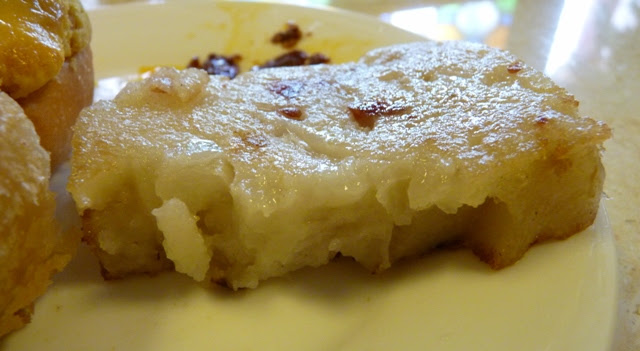 Turnip Cake is a favorite. Bob and I have sampled them from Cleveland, to New York, to San Francisco, to Hong Kong itself - and our favorite remains the version served at Wonton Gourmet, a few blocks from Emperor's Palace. However, while Wonton Gourmet's product has the most appealing creamy texture, the fresh flavors bursting out of Emperor's Palace's version make it a most worthy and close runner up. The dried shrimp and pork slivers offered distinctive flavors that stayed separate in the cake, so each bite had a slightly different flavor. Highly recommended.

We also ordered two "regular" menu items to share. First, Crispy Duck (half the duck, an amazing value at $9.95). 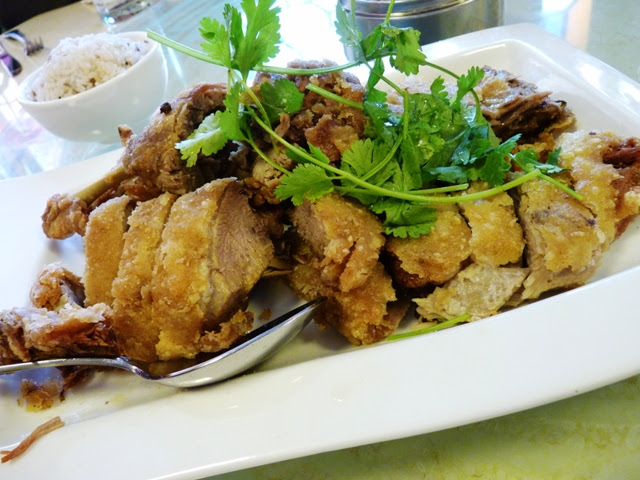 The first bite offered a huge hit of umami - so much that I wondered if there was MSG in the crispy coating. Our hostess assured us that Emperor's Garden doesn't use MSG (but it wouldn't bother me if they did); could regular salt offer that much flavor kick all by itself - or was there some other agent at work here? The seasoning inside the duck complimented the amazingly crisp skin, and the flesh was moist and tender. This was a perfectly cooked half duck. 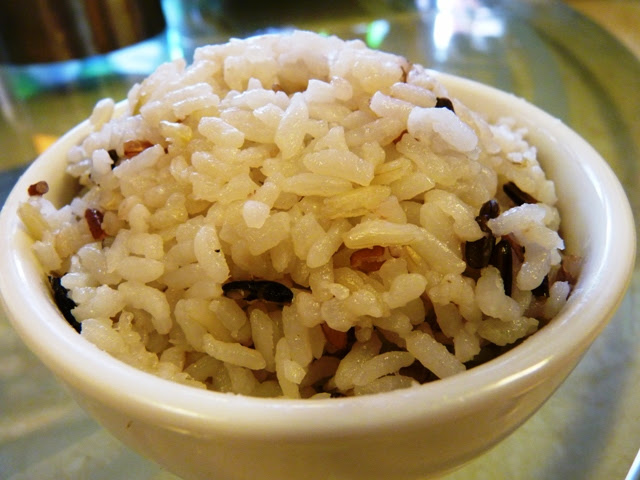 Both the duck and our second entree were served with a small bowl of the house rice, which they call "Healthy Mix Rice" - white rice with "Red and Brown Wild Rice." While not at all traditional, it was most delicious.

Our last dish, the authentic version of "chow mein" (or fried noodles) was called both "hot" and "spicy" for a good reason, which we discovered shortly after tucking in: in addition to the red chili you can see in the photo, the dish contained a generous helping of Szechuan Peppercorn, which led to a delightful "ma la" buzz on our tongues. While the dish would win a "best of" prize from our table for that aspect alone, I was blown away by the freshness and skilled preparation of the fish filet; I can't remember enjoying the lowly tilapia so much. The crisp vegetables provided the perfect counterpoint to the moist and tender fish and the chewy noodles. A truly worthy dish.

Emperor's Palace is off to an auspicious start, and I hope that they continue with their winning ways. I anticipate additional visits in the next few weeks, so be sure to check in with this blog's Facebook page to see all of the photos and keep up to date on everything we've sampled. Or, drive, bike or bus yourself down to Cleveland's original Chinatown and have sum fun playing with the authentic Chinese cuisine offered at Emperor's Palace.

Nancy Heller
Cleveland, Ohio
As a kid, I ignored the kitchen because I always had a book to read. After going to college and law school, I was finally on my own, just as my mom became severely afflicted with Multiple Sclerosis. The fear of losing her matzoh balls and gefilte fish compelled me to take my first tentative steps into the kitchen. Then, a viewing of Juzo Itami's food-and-sex, noodle-Western masterpiece "Tampopo" and a few Chinese cooking classes from the local university adult school cemented my immersion into the world of food and drink. Together, my husband Bob and I cook, eat and travel. We occasionally cater for large groups (75-1900 people is the range so far). We love playing with food at all of its many levels, and my blog helps us to share my credo that "Life is Too Short to Not Play with Your Food." So follow my blog and have fun playing with our food!